What is the placebo effect?

What is the placebo effect?
The term placebo originated in the realm of medicine, but the discussion surrounding this phenomenon has extended to psychological treatment and research as well. The classic description of a placebo effect is an ‘inert’ treatment i.e. one that does not possess any active ingredients, that still somehow leads to improvements.
A common example is giving someone a pill made out of sugar instead of actual pain medicine. When you give someone this sugar pill you would not expect their pain to go away. Surprisingly however, taking such a placebo pill can in fact work, as multiple studies have indicated. Moreover, people don’t just subjectively feel better after receiving a placebo but they also improve on a physiological level for instance showing reductions in neural activity in brain areas that process pain.

The improvements that have been found as a result of receiving a placebo treatment are remarkable, but if a placebo is indeed ‘inert’.. how is it even possible for people to improve? 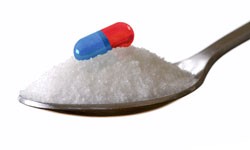 How can the placebo effect be explained?
The discussion of the placebo effect has shifted over time from the classic example of ‘inert’ placebo pills to factors that ‘simulate active treatment’. In this context, various environmental and/or psychosocial factors have been proposed that may explain the placebo response.

Expectations
The placebo effect has most often been linked to people’s expectations. Specifically, if someone believes that a treatment will help them improve, then it is very likely that it actually does. Interestingly, the opposite effect has been found as well with negative outcomes (e.g. side-effects) being more likely to occur as a result of negative expectations. This phenomenon has been described as the nocebo effect.

Desires
Another factor that may play a role, one that is closely linked to people’s expectations, is the desire to obtain positive results or to avoid negative results.

Meaning
Certain elements of a treatment may be associated with a certain meaning, and these associations may in turn influence treatment outcome. In one example, people either received blue pills or red pills with the exact same content. Interestingly, depressant effects were more commonly reported with the blue pills, whereas stimulant effects were reported with the red pills, likely due to certain colour assocations.

- Natural history is a natural decline in symptoms, purely due to the passage of time.
- Regression to the mean is when individuals with extreme scores on any measure at one point (e.g. the initial assessment) will have less extreme scores the next time that they are tested (closer to the average) for purely statistical reasons.

Reseacher and consultant at GEMH Lab
All updates from Joanneke

Behavioural scientist, lecturer, consultant, gamer, dungeon master, language enthusiast, and lover of all things geeky. Passionate about creating and validating interventions and interactive experiences that can help us understand and manage our well-being in a playful and meaningful way.

Reseacher and consultant at GEMH Lab